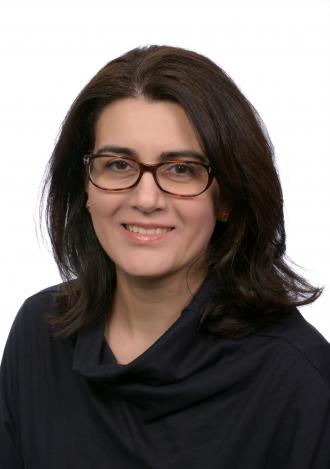 Diana Abouali is the director of the Arab American National Museum (AANM). She has worked in higher education and in the museum and cultural heritage sectors in the United States, Palestine and Jordan. Diana joined ACCESS in 2019.

Born in Toronto, Canada to Palestinian parents, Diana completed her secondary education in Kuwait. She is a graduate of Wellesley College and received an MA in Middle Eastern Studies (1995) and a PhD in History and Middle Eastern Studies (2004) from Harvard University. From 2005 to 2012, Diana was an assistant professor at Dartmouth College, teaching courses in Arab-Islamic civilization, gender studies and the social and cultural history of the Middle East.

From 2012 to 2013, Diana worked as Head of Research and Collections at the newly established Palestinian Museum in Birzeit, Palestine. Relocating to Amman, Jordan in 2014, she worked as Director of Education, Outreach and Awareness at the Petra National Trust. She was Project Manager at Tiraz: Widad Kawar Home for Arab Dress on an AHRC-ESRC Global Challenges Fund (UK) project, in cooperation with Plymouth University and the Information and Research Center-King Hussein Foundation. In that position and as part of a larger study of resilience among male Syrian artisan refugees in Jordan, she co-produced a training program and toolkit in social-enterprise creation to preserve cultural heritage. Diana has organized and delivered cultural heritage education workshops to Syrian children and women in the Azraq and Zaatari refugee camps, and occasionally teaches college-level courses in the U.S. and Jordan.

Diana is a member of the general assembly of Taawon-Welfare Association, the largest Palestinian NGO that provides development and humanitarian assistance to Palestinians in the occupied Palestinian territory and Lebanon. She is also a member of the Board of Directors of ArteEast (NYC) and CultureSource (MI) and serves on the Citizens Advisory Committee at the University of Michigan-Dearborn. She is a graduate of Leadership Detroit XLI.