“MENA” communities represent all people with Middle Eastern and North African descent. There are currently more than 5 million MENA Americans living all over the U.S., with the largest concentration of MENA populations living in California, Michigan and New York. MENA is a racial/ethnic minority group, but that’s not how we’re recognized by our federal government, who has historically categorized us as “white” on the U.S. census. That means over 5 million people’s unique diverse ethnic backgrounds, traditions, characteristics and needs are being overlooked and underrepresented, which imposes many issues for our communities. Most of all, it strips us from political representation and power along with the resources and funding we need to thrive as communities.

The Office of Management and Budget (OMB)’s most recent guidance, which was last updated in 1997, defines “White” people as “a person having origins in any of the original peoples of Europe, the Middle East, or North Africa.” As a result, individuals from the Middle East or North Africa (MENA) must either self-identify as “White” or “Other” on federal documents. Currently, OMB’s statistical policies prevent any federal agency from considering or meeting the needs of the MENA community, leaving them systemically underserved.

The Census Bureau’s own research suggests that 87% of people with Middle Eastern or North African backgrounds would choose to self-identify as MENA over White.

Why does it matter if MENA is on the census?

Our federal government uses census data to determine how hundreds of billions of federal funding dollars gets spent every year. This includes grants to support states, counties and communities. The money is used to fund schools, hospitals, roads and more than 100 public programs like the ones below:

Census data is also used to determine political power through apportionment - the process that determines how many seats each state gets in the U.S. House of Representatives. And without MENA communities being counted, we lack representation in congress.

What does a MENA category on the census mean for other non-MENA communities?

MENA communities exist all throughout the United States, and when we’re not counting them, they’re not receiving the support needed to benefit their community and thus our nation as a whole.

If MENA communities are not given that support, the communities around them will suffer as well. The health of minority communities impacts the health of the city, county and state they reside in. When communities get the support they need, they’re able to be more productive members of society.

For example, when MENA communities are recognized as a marginalized community, our government will help fill our schools with adequate mental health services. Without that support, schools are left struggling to meet the needs of some of their students, which impacts the way they serve the entire school population.

What is NNAAC doing to change how MENA communities are recognized?

The House Congressional Committee on Oversight and Reform (COR) will invite other members of Congress to co-sign a letter requesting that OMB and the President revise the 1997 federal standards for data collection on race and ethnicity to include a separate category for the MENA community.

The National Network for Arab American Communities (NNAAC) recommends that the Office of Information and Regulatory Affairs (OIRA) within OMB introduce a notice of a possible rule change in the Federal Register to add a disaggregated “Middle Eastern or North African” data category to Statistical Policy Directive No. 15. Doing so would allow federal demographic data to reflect our nation’s racial and ethnic diversity while creating opportunities to meet the needs of the MENA community.

How else is NNAAC supporting MENA communities?

NNAAC, in partnership with elected officials and ACCESS is taking many steps to support these communities at the federal level. We have helped U.S. Rep. Rashida Tlaib (D-MI) and Rep. Debbie Dingell (D-MI) draft and introduce legislation to modify section 1707 of the Public Health Service Act to require the U.S. Department of Health and Human Services’ (HHS) Office of Minority Health (OMH) to recognize MENA individuals as a racial and ethnic minority group and build equitable and inclusive requirements within OMH programs.

Read more about the progress we’re making to build equity for MENA communities: 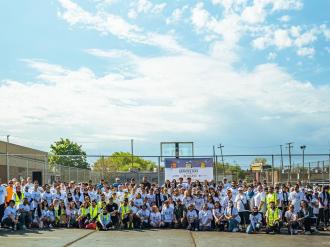