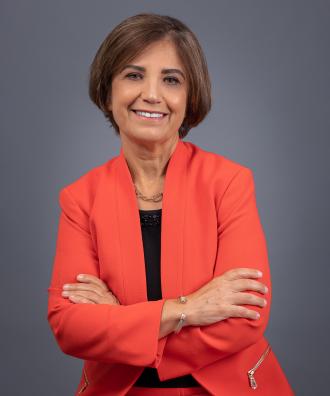 Maha Freij is the President & Chief Executive Officer at ACCESS and is a leading visionary in the Arab American community with regard to philanthropy and building strong institutions to strengthen the voice of the community in American civil society.

Under her leadership, the Center for Arab American Philanthropy (CAAP), a national institution of ACCESS, has established itself as the only national Arab American community foundation in the U.S., connecting philanthropists across the country and helping them to make a greater impact. Maha has also been a key leader in growing ACCESS from its roots as a regional human services organization to what it is today — a community builder nationwide. Under Maha’s inventive leadership, ACCESS has successfully raised tens of millions of dollars for endowment building and various brick-and-mortar projects, including the first-ever Arab American National Museum in the United States.

In addition, Maha oversees ACCESS’ $30 million operational budget, generated from more than 100 funding sources. Her solid experience in management and operations, combined with her inspiring approach to philanthropy and community, has positioned ACCESS as the leading organization addressing the many complex issues that face the Arab American community.

Maha currently serves as a member on the Michigan State Board of Ethics; as a trustee on the Council of Michigan Foundations; on the Board of Trustees for the Detroit Symphony Orchestra; and on the Detroit Future City Board. Her prior board memberships and affiliations include community board member of Wayne Health (previously named Wayne State University Physician Group) United Palestinian Appeal; One D Initiative – Champions Council; the Mosaic Youth Theatre; Leadership Detroit Class of XIX; University of Michigan - Dearborn’s Citizens Advisory Committee; ACLU-Michigan; and the Independent Sector Advisory Group on Nonprofit Effectiveness.

Maha is a graduate of the Hebrew University with a bachelor’s degree in accounting and economics. She is credited as the first Arab/Palestinian woman to earn a CPA license in Israel in 1989 – the same year she immigrated to the United States.