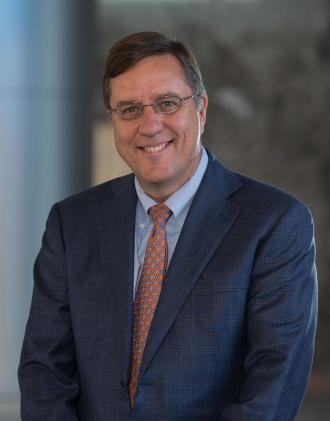 Robert A. Richard is the executive vice president of IT, Customer Service and Corporate Services for DTE Energy. Richard is responsible for overseeing the Customer Service organization, the development of enterprise standards and technology architecture and the strategic management of the company’s procurement, supplier performance management, warehousing, fleet, facilities and real estate organizations.

Richard has been with DTE Energy since 2003. Prior to his current role, Richard was vice president of Major Enterprise Projects and Customer Service where he was responsible for overseeing the Customer Service organization, along with the company’s major projects in Power Generation, Distribution, Renewable, Gas Distribution and Midstream platforms.

Prior to joining DTE Energy, Richard was vice president of operations and process improvement at Bethlehem Steel. This role was responsible for sales, marketing and operations of the eastern division. Previously, he spent 13 years at General Electric where he served in a variety of leadership roles. Richard was senior executive for GE LEXAN Americas Manufacturing and responsible for Phenolics, BPA, SAN, Chlorine and Polycarbonate extrusion.

Richard earned a Bachelor of Science and Master of Science in Chemical Engineering from The Ohio State University. At Ohio State, his graduate work was in coal technologies, which included liquefaction, gasification and the microbial desulfurization of coal. Richard is a graduate of the Nuclear Reactor Technology course of MIT and he is a certified Master Black Belt from GE and the Six Sigma Academy. He received the Whitney Award for technical achievement at GE. Richard is a member of the Engineering Advisory Boards for Central Michigan University and Oakland University.

DTE Energy (NYSE: DTE) is a Detroit-based diversified energy company involved in the development and management of energy-related businesses and services nationwide. Its operating units include an electric company serving 2.3 million customers in Southeast Michigan and a natural gas company serving 1.3 million customers in Michigan. The DTE portfolio also includes non-utility businesses focused on industrial energy services, renewable natural gas, and energy marketing and trading. As an environmental leader, DTE utility operations will reduce carbon dioxide and methane emissions by more than 80% by 2040 to produce cleaner energy while keeping it safe, reliable and affordable. DTE Electric and Gas aspire to achieve net zero carbon and greenhouse gas emissions by 2050. DTE is committed to serving with its energy through volunteerism, education and employment initiatives, philanthropy and economic progress. Information about DTE is available at dteenergy.com, empoweringmichigan.com, twitter.com/dte_energy and facebook.com/dteenergy.