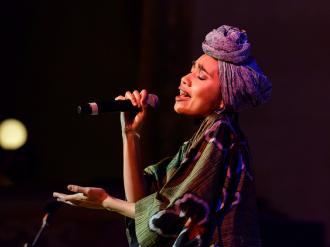 What is Concert of Colors?

The Concert of Colors is metro Detroit’s free annual diversity-themed music festival. It is produced by the Arab American National Museum with partners Detroit Symphony Orchestra, Detroit Institute of Arts, Charles H. Wright Museum of African American History, ACCESS and University of Michigan – Detroit Center. The goal of this five-day festival is uniting metro Detroit’s diverse communities and ethnic groups by presenting musical acts from around the world. Over its 25-year history, the festival has become a beloved highlight of metro Detroit’s summer festival season, and one of the few free-admission music festivals remaining locally.

The Concert of Colors was established by Ismael Ahmed – the former head of the human services organization ACCESS – and New Detroit in 1993 as a one-day event at Chene Park on Detroit’s riverfront. The inaugural event drew a modest crowd to Chene Park, but by 1999, some 10,000 music lovers were coming out each year. The festival expanded to three days in 2001, when it was part of the official festivities for Detroit’s 300th birthday, drawing an audience of 100,000.

In 2005, the festival’s opening night performance was relocated to historic Orchestra Hall at the Max M. & Marjorie S. Fisher Music Center in Detroit, the recently expanded home of the Detroit Symphony Orchestra (DSO). The DSO became a full partner in 2006 as the entire festival relocated to the Max M. & Marjorie S. Fisher Music Center, with two indoor stages and one outdoor stage. In 2007, the festival grew to encompass four days of free live music. From June-August 2008, the Arab American National Museum presented a photo exhibition by official fest shooters Bruce Harkness and Rebecca Cook celebrating the festival’s historic performers over the years, called Concert of Colors: Exposed.

In 2010, the Detroit Institute of Arts joined this remarkable collaborative effort, becoming a second venue for Concert of Colors. In 2011, the number of festival venues expanded to four, with the addition of the Scarab Club and a new presenting partner, the Charles H. Wright Museum of African American History. Also in 2011, the University of Michigan Detroit Center began programming the Outdoor Stage at Max M. & Marjorie S. Fisher Music Center; the following year, Michigan State University’s Detroit Center partnered with UM on the Outdoor Stage.

In recent years, attendance at the Concert of Colors has been about 80,000.

World music, including the indigenous music of the Motor City, is the major focus of the Concert of Colors, but not the only focus. The festival also offers ethnic food and merchandise vendors and in 2014, restored the annual Forum on Community, Culture and Race that began in 2006 but has not taken place for the last few years. The Forum is a conference featuring presentations and discussion among artists, people connected to cultural institutions and community leaders to examine the role of arts and culture in overcoming racial and ethnic barriers.