It is with great sadness that we acknowledge the passing of prominent Arab American historian and groundbreaking journalist, Joseph R. Haiek.

Through his lifelong commitment to empowering Arab Americans through sharing their stories, Haiek has served as an extraordinary example of what inspirational leadership looks like in our community. His accomplishments were recognized and celebrated through many awards such as the prestigious Ellis Island Medal of Honor in 2011, and ACCESS’ Arab American of the Year in 2004.

The work of ACCESS and many organizations alike, is reinforced by extraordinary individuals like Joseph Haiek. His inspiring accomplishments and direct contributions to the communities we serve are lessons that will continue to resonate. We stand proud of his legacy as a historian, journalist and community leader. Our thoughts are with Mr. Haiek’s family and many friends as they cope with this significant loss. 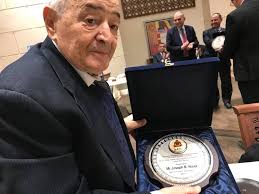