ACCESS to honor Arab Americans of the Year on April 12 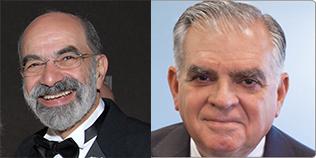 DEARBORN, Mich. – A former United States secretary of transportation and an award-winning professor will be honored as Arab Americans of the Year at the ACCESS Anniversary Dinner, which takes place on Saturday, April 12, in Detroit, celebrating ACCESS’ 43 years of service in southeast Michigan and across the country.

This year’s Arab American of the Year honorees are the Hon. Ray LaHood, 16th U.S. Secretary of Transportation under President Barack Obama, and Dr. Fawwaz Ulaby, a recipient of the Thomas Edison Medal and professor of electrical engineering and computer science at the University of Michigan in Ann Arbor.

The dinner attracts more than 1,700 guests each year, including local, state and national dignitaries. It is the largest Arab American event of its type in the United States. The Arab American of the Year award is a hallmark of the annual event, celebrating the achievements of extraordinary Arab Americans. Past honorees include nationally recognized and award-winning journalist Diane Rehm, Nobel Prize winner Ahmed Zewail, financier Peter Tanous, actors Jamie Farr and Tony Shalhoub, and U.S. Gen. George Joulwan.

This year’s dinner begins at 6 p.m. on Saturday, April 12, at the Marriott at the Detroit Renaissance Center. Sponsorship packages are available. For more information about sponsorship, please contact Rose Srour at 313.842.4749. Individual tickets are $100 and can be purchased online at www.accesscommunity.org.