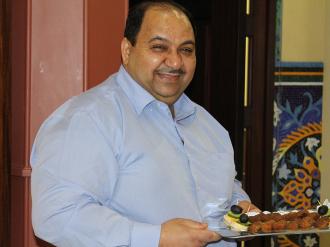 In attendance were 15 graduates of the program along with Michael Ansara, ACCESS Growth Center director. During the event, entrepreneurs showcased their new businesses and products while also networking with the community.

Iesha Morgan attended the event with her fellow classmates to celebrate the new skills she applied to her tax preparation business, Unity Tax Services.

“I wouldn’t be able to be in business without the lessons I learned from the ACCESS Growth Center instructors,” said Morgan. “I didn’t know about budgeting, paying employees or target markets and after going through the classes at the Growth Center, I learned how I could do all of these things. People who you think wouldn’t be in your corner made my dream possible.”

The Growth Center supports immigrant entrepreneurs and other business-minded individuals who want to start or grow their own company. During its first year of operation, the center helped 93 entrepreneurs and connected them to numerous financial and mentoring resources available throughout southeast Michigan.

ACCESS Growth Center is open to all people regardless of race, gender, sexual orientation or gender identity.

“The road to starting up a business is interesting and exciting, with many peaks and valleys,” Ansara said. “Some of us have deeper valleys and some of us have higher peaks. Whether you are Arab American or not, we’re here to showcase the accomplishments of our entrepreneurs.”

Omar Hashwi, a student at the University of Michigan, studied abroad in Indonesia where he was inspired by the culture of entrepreneurship. When Hashwi came home and witnessed the tech startup culture booming in Detroit, he decided he wanted to combine his love of music and technology to create something completely new. Haswhi’s business, called Stamp.fm, is a website where new bands and groups can promote their music through online music tournaments. Hashwi hired 13 interns last summer and is planning on expanding in the near future.

“I want to revolutionize the music industry and focus on the problems that fans, promoters and artists all face in finding good music,” Hashwi said.

Grounded in the Arab American tradition of hospitality, ACCESS has a 43-year history of providing health, education, employment and social services in greater Detroit to empower people to lead healthy, informed, productive lives. Today, ACCESS extends that mission to a national platform through advocacy, arts, culture and philanthropy. Visit us online at www.accesscommunity.org.