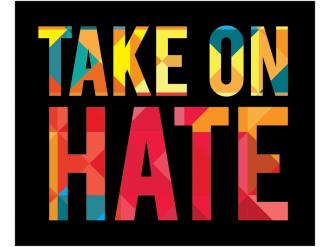 Washington, D.C. – March 24, 2014 – The National Network for Arab American Communities (NNAAC), a project of ACCESS, today launched The Campaign to TAKE ON HATE, a multi-year, grassroots campaign to challenge this country’s growing prejudice and persistent misconception of Arab and Muslim Americans, including refugees of Arab and Muslim descent. Held at the National Press Club, the launch brought together hundreds of NNAAC members, allied partner organizations, members of the Arab American community, policymakers and supporters committed to addressing the hateful behavior toward Arab Americans and to standing up for change.

ABC Family’s announcement last week and subsequent cancelation days later resulting from the negative reaction received on their ordering of a pilot called, “Alice in Arabia,” a drama about an American teenager kidnapped and taken to Saudi Arabia where she must “find a way to return home while surviving life behind the veil.” The backlash to a Coca-Cola Super Bowl commercial celebrating the diversity of American pride, including that of Arab Americans.  Northeastern University’s recent banning of on-campus activities hosted by the Students for Justice in Palestine. Since 9/11, there has been a vast increase in discrimination toward the Arab American community that has enabled a double standard around allowing hate and discrimination toward Arab Americans when compared to other populations.

“It’s time to confront the ‘acceptable bigotry’ toward Arab Americans. Judgment, profiling, slandering, making jokes – no matter how it’s delivered, it’s still hate. It’s still happening. It’s still wrong,” said Nadia Tonova, executive director for NNAAC. “TAKE ON HATE moves us closer to being a nation that upholds dignity and equality for all - regardless of national origin, ethnicity or religion.”

TAKE ON HATE aims to achieve meaningful social change not only through public education, media and coalition building, but also by providing a platform for Arab Americans to speak up and inspire real policy change that challenges institutional discrimination and protects the rights of all communities.

Today’s launch at the National Press Club marked the 10th anniversary of the National Network for Arab American Communities and also coincided with the D.C. start of the 6th annual Arab American Advocacy Week, which brings together hundreds of NNAAC members from across the U.S. for meetings with elected officials on Capitol Hill. In addition to NNAAC’s Tonova, speakers at today’s news conference included:

The campaign will launch in four additional cities this year – Detroit (Dearborn), Chicago, New York and San Francisco – with the aid of strategic partnerships, earned and paid media, grassroots events and meetings with policymakers.  As TAKE ON HATE continues to roll out, it will mobilize support from within and outside Arab American communities to address the injustices, bias and hate this population faces daily – whether at work, home or play.

"Even though it has been nearly 13 years since 9/11, Arab American, South Asian, Muslim and Sikh communities continue to experience the impact of hate violence, bullying, profiling, and surveillance," said Deepa Iyer, former director of South Asian Americans Leading Together (SAALT) and member of NNAAC's Advisory Committee. "This environment has been further exacerbated by anti-immigrant sentiment and racial anxiety. Still, community members and organizations are finding opportunities to come together to challenge unfair policies and build solidarity."

For more information on The Campaign to TAKE ON HATE, please visit takeonhate.org.

About The Campaign to TAKE ON HATE

The Campaign to TAKE ON HATE, powered by the National Network for Arab American Communities, challenges our country’s growing prejudice and persistent misconceptions of Arab Americans and moves us closer to being a nation that upholds dignity and equality for all – regardless of national origin, ethnicity or religion. Through a coordinated grassroots effort, TAKE ON HATE increases awareness and education about Arab Americans and what they mean to our communities and calls upon all Americans to address the perception of and hateful behavior toward Arab Americans and stand up for change. For more information, visit takeonhate.org.

About the National Network for Arab American Communities

The National Network for Arab American Communities (NNAAC), a project of ACCESS, is a national consortium of independent Arab American community-based organizations. The Network’s primary mission is to build the capacity of Arab American nonprofit organizations that focus on the needs and issues impacting their local community, while working to collectively address those issues nationally. NNAAC, which was established in 2004, currently has 23 members in 11 states.  To support its mission, NNAAC has three main programs: Capacity Building, Advocacy & Civic Engagement, and Youth & Community Service. For more information, visit nnaac.org.