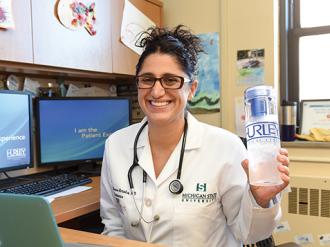 DEARBORN, Mich.– ACCESS, the nation’s largest Arab American community nonprofit organization, will present its 2016 Champion of Justice award to internationally recognized Flint-area pediatrician Dr. Mona Hanna-Attisha.  The award will be presented at the ACCESS 45th Annual Dinner, the largest event of its kind in the U.S. with more than 2,000 attendees, taking place on April 23, 2016, at the Detroit Marriott at the Renaissance Center.

“We are honored that Dr. Hanna-Attisha will be joining us at our 45th Annual Dinner,” said Hassan Jaber, ACCESS Executive Director. “Her tireless advocacy on behalf of the people of Flint is a tremendous inspiration not only to all of us at ACCESS, but to communities across the nation. There is no one more deserving of our 2016 Champion of Justice award.”

Dr. Hanna-Attisha is widely recognized as the whistle-blower who forced the state of Michigan to acknowledge toxic levels of lead in Flint’s water supply, and has been the voice of the children of Flint throughout the crisis. She has appeared on CNN, MSNBC, BBC and countless other media outlets championing the cause of public health and encouraging others to join her in providing assistance to Flint’s residents.

"As a first generation Iraqi-American, I am honored and humbled to receive this award from ACCESS, an organization that has heroically championed justice for decades,” said Dr. Mona Hanna-Attisha. “What happened in Flint is a story of profound injustice; however, Flint is full of champions that are fighting everyday for a brighter tomorrow. Our work is just beginning.”

This year’s prestigious Arab American of the Year award will also be presented at the ACCESS 45th Annual Dinner to distinguished international advocates and philanthropists Ghassan and Manal Saab. The husband-and-wife team is dedicated to the revitalization of the city of Flint. Their unwavering support of various impactful institutions that are changing lives across the world embodies the spirit of compassion that is at the heart of ACCESS’ efforts to empower our communities.

This year’s dinner will also feature a performance of the Motown classic Ain’t No Mountain High Enough by two Detroit Public Schools choirs, from the Cody Academy of Public Leadership and Renaissance High School. The Detroit Public Schools district, comprised of 106 schools, is a longtime partner of ACCESS, and we’re excited to spotlight some of its best and brightest students.

Grounded in a grassroots commitment to serving our community, ACCESS has a 45-year history of providing health, education, employment and social services.  An Arab American nonprofit of excellence, ACCESS empowers communities in Southeast Michigan to improve their economic, social and cultural well-being and extends this mission nationally through advocacy, arts, culture and philanthropy.