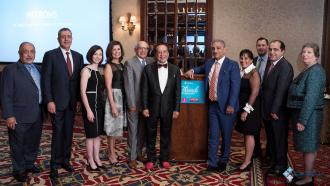 CAAP, an ACCESS institution, is a national community foundation with the objective to unite and empower the Arab American community by demonstrating the impact of giving together. CAAP improves communities through grantmaking, serves donors by providing smart charitable giving tools, and shapes perceptions about Arab Americans by highlighting their exceptional contributions to society.

At its inaugural gala, CAAP recognized Dr. Farouk Shami, founder of Farouk System Inc.--which exports CHI and BioSilk hair and skin products to over 100 countries--with theOutstanding Arab American Philanthropist Award in honor of his outstanding humanitarian efforts locally and abroad. Among his many contributions was a donation of over $5,000,00 in hair supplies to local shelters and hair solons affected by the devastating impact of Hurricane Harvey in 2017.

Shami had also notably assisted with disaster relief efforts after tragedies such as, 9/11, Haiti, Hurricanes Katrina, Rita, Ike and Sandy. He also founded and supported several educational scholarships and institutions, including an institution in Palestine to support young women pursuing careers in STEM fields.

"Farouk is an accomplished businessman, but more than that, he is a role model regionally and internationally,” said Maha Freij, Director of CAAP. “He sets the example for others with his philanthropic work, not only in the Houston community, but across the United States and globally as well. We want to celebrate him and the example he sets as a role model."

To an audience of over 200, Dr. Shami reflected on his immigrant experience and focused on the importance of Arab American philanthropy in his acceptance speech. "What America gave us is opportunity, and what we give back is responsibility. What does that mean? Helping each other, loving each other, freedom of choice and freedom of opportunity. All of that came with America. As Arab Americans, we need to be responsible. We need to give back to our communities.” Said Dr. Shami.

Emceeing the event was eight-time Emmy award winner, Ms. Deborah Duncan of KHOU-TV. The program also included a statement from the CAAP Chair, Mr. Hussien Shousher, and a stunning classical Arabic musical performance by Le Trio Joubran, a trio of Palestinian brothers Samir, Wissam and Adnan Joubran, who are originally from the city of Nazareth and have been nominated for an Academy award for their work on the Palestinian-based documentary 5 Broken Cameras.

The ceremony also highlighted CAAP’s contributions to the Houston area which included, granting more than $50,000 for Syrian refugee families through the Building Blocks for New Americans Program (BBNA), the Adawia Alousi Scholarship fund-- which continues to support young women in STEM fields across the nation, and support to Hurricane Harvey recovery efforts through a disaster relief fund.

The Center for Arab American Philanthropy (CAAP) is a national community foundation and a national institution of ACCESS—the largest Arab American community nonprofit in the U.S. CAAP’s objective is to unite and empower the Arab American community by demonstrating the impact of giving together. We improve communities by making grants to nonprofit organizations. We serve donors by providing them with smart tools and resources to carry out their philanthropic giving. We build leaders by educating and inspiring Arab Americans, including youth, to realize their potential for change. Most of all, we shape perceptions about Arab Americans by highlighting their generous heritage and exceptional contributions to society. Visit www.centeraap.org to learn more.

Grounded in a grassroots commitment to empowerment, ACCESS is the largest Arab American community nonprofit in the U.S., with a 47-year history of nonprofit of excellence. Guided by our vision of a just and equitable society for all, with the full participation of Arab Americans, we empower communities in Southeast Michigan to improve their economic, social and cultural well-being through an extensive network of health, education, employment and social services programming. Our mission extends nationally through our highly esteemed institutions—The National Network for Arab American Communities (NNAAC), the Arab American National Museum (AANM) and the Center for Arab American Philanthropy (CAAP)—which are focused on making an impact through advocacy, the arts and philanthropy.