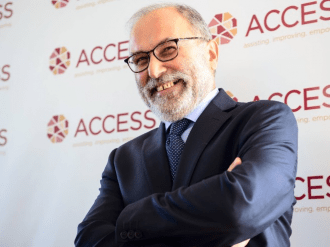 Dearborn [September 29, 2021] –ACCESS outgoing President and CEO Hassan Jaber will receive the Detroit Branch NAACP’s James Weldon Johnson Lifetime Achievement Award at its 66th Annual Fight for Freedom Fund Dinner on Sunday, October 3 at 5 p.m. at the TCF Center in Detroit. Jaber will be recognized for his 40-plus years of “exemplary leadership and service, as an inspiration to generations of individuals focused on improving quality of life.”

“I am incredibly grateful and humbled to receive such a distinguished award from the Detroit Branch NAACP, an organization that has served as a beacon of hope for so many. To be honored by such an esteemed and deeply rooted community organization with a recognition that has been bestowed on the likes of Congressman John Lewis is a privilege and a lifetime honor,” states Hassan Jaber.

Earlier this year, ACCESS announced Jaber’s plans to transition from his current position to pursue work on some transformative national projects that he is deeply passionate about. His last day as ACCESS President and CEO is September 28. His decision marks the conclusion of a remarkable career of over four decades of service to ACCESS - including 13 years as CEO - in pursuit of community empowerment and social change across the U.S.

Since joining ACCESS in 1980 and rising from the positions of COO and Executive Director, Jaber has helped grow the organization to 120 programs, operating out of 11 locations in southeast Michigan, and three respected national Arab American institutions. Through his comprehensive work with national foundations, think tanks, policy, civil rights and advocacy organizations, Jaber has created national platforms to help address the challenges facing Arab Americans and has spearheaded conversations to create an inclusive national Arab American agenda. Jaber is a sought-after thought leader and community partner whose impact can be felt through his service to many national and community boards, including the U.S. Census National Community Advisory Board on Race and Ethnicity and the Michigan Census Complete Count Committee; United Way for Southeastern Michigan; the Detroit Institute of Arts; and the Detroit Zoological Society. For more information on Hassan’s accomplishments, career and board affiliations, click here.

The theme for this year’s Fight for Freedom Fund event is Don’t Rest On Your Freedom. According to Detroit Branch NAACP President Rev. Dr. Wendell Anthony, this event is taking place “amidst the attack on our democracy by people from within our own nation. We have witnessed the introduction of over 400 voter suppression bills and the adoption of laws in over 18 states to reduce and take back the vote of Black, brown, young people, women and seniors. We must stand up and speak out. In the words of Congressman John R. Lewis ‘we all must engage in some good trouble.’ Our nation and our future depend on our activism in these very critical times.”

ACCESS extends its enthusiastic congratulations to Hassan Jaber on his esteemed NAACP honor and as he embarks on this new endeavor. Best of wishes to all this year’s honorees and the Detroit Branch NAACP on this landmark event as well.

“I have never considered the work that I do a ‘job’,” says Jaber. “It has always felt more like a lifetime mission for me. What greater fulfillment is there than to have the opportunity to help advocate for greater equity and justice for our world? I consider myself very lucky to get to do, every day, what I’m most passionate about.”

Grounded in a grassroots commitment to empowerment, ACCESS is the largest Arab American community nonprofit in the U.S., with a 50-year history of nonprofit of excellence. Guided by our vision of a just and equitable society for all, with the full participation of Arab Americans, we empower communities in Southeast Michigan to improve their health and their economic, social and cultural well-being through an extensive network of health, education, employment and social services programming. Our mission extends nationally through our highly esteemed institutions—The National Network for Arab American Communities (NNAAC), the Arab American National Museum (AANM) and the Center for Arab American Philanthropy (CAAP)—which are focused on making an impact through capacity building, advocacy, the arts and philanthropy.